Dealing with Disinformation: A Global Challenge

This week Asia Matters joins forces with the Centre for Security, Diplomacy and Strategy at the Brussels School of Governance, home to a rich expertise on Asia and working to enhance understanding of Europe’s security challenges in the region. Our first in what will be a series of episodes is on disinformation.

Disinformation has become somewhat of a buzzword over the last few years, particularly in the wake of Russian interference into the 2016 US election. But what exactly do we mean when we talk about ‘disinformation’ - and who is spreading it, and how?

Governments, academics and journalists have been playing ever closer attention to the phenomenon, especially when it comes to state actors - and for Europe, the US and its allies, that means Russia and China in particular.

But faced with a vast array of actors and motives - from pro-Kremlin troll farms to China’s so-called wolf warrior diplomats - what efforts can governments take to lessen their impact?

To discuss this, we are joined by Lutz Guellner, the Head of Strategic Communications at the European External Action Service , the EU’s diplomatic service. And Bonji Ohara, an expert in defence issues and Senior Fellow at the Sasakawa Peace Foundation, joins us from Tokyo.

Lutz Guellner is Head of Strategic Communications for the European External Action Service. Prior to his current position he served as Head of the communications team in the European Commission’s Directorate General for Trade (2013-17). He was also Deputy Head of the Trade Strategy Unit and responsible for the coordination of EU-US trade and economic relations. In 2009 and 2010, he was spokesperson for the High Representative of the European Union for Foreign Affairs and Security Policy, Catherine Ashton. In previous positions, he was in charge of economic relations between the EU and Russia. He studied political science and international relations at the Free University of Berlin and the Institut d’Etudes Politiques in Paris. 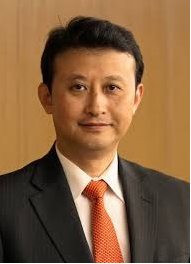 Bonji Ohara is an expert in defence issues and Senior Fellow at the Sasakawa Peace Foundation. Prior to this, he worked for IHS Jane's from 2011 as an analyst and business development manager, and for the Tokyo Foundation as a Director of Research. In 2010, he joined NIDS as a research fellow. He previously served in Japan's Ministry of Defense as a Naval Attaché between 2003 and 2006 and became a chief of the intelligence section, Maritime Staff Office in Ministry of Defense, in 2006; Executive Officer of the 21st air squadron, MSDF, in 2008; and Commanding Officer of the squadron the following year. He graduated from the National Defense Academy of Japan and earned his M.A. from the University of Tsukuba.